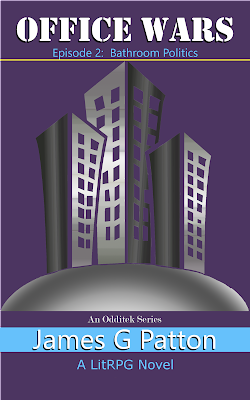 Office Wars is in full swing, and Bran finds his everyday life in disarray. Vicky poses a problem, but he lacks the time and resources to figure it out. He can no longer bail on Office Wars, or it could very well mean his freedom. His employer manipulates him into a deal, but Bran cannot be sure what is really at stake. There is even a Salary on the line, and if Bran fails to hold up his end of the deal, then he will become a Serf for the next five years.

In the middle of everything, he is starting to believe the people on his team are becoming real friends. As he gets to know some of them, he realizes Office Wars could change their life, and his decisions in Office Wars were inadvertently putting them all at risk. A tough decision is before him, and he might have the one Poker Chip that can bind them all.

Between his employer's manipulations, Vicky, Office Wars, and the potential permanent loss of a friend he is finding out that he cannot do it all alone.

Can he navigate his changing world, and still hold onto the things he cares about most? Or are all the secrets going to tear his world apart?

You can find all my books here:  James G Patton's Amazon Author Page

Bran was one of the first to purchase a full immersion Virtual Reality Pod that he calls the Coffin, but over a century later, ironically, he finds himself part of the 1% that does not live virtually. He sleeps in a real bed and eats real food and only jumps into Neuroma to work.

All he wanted was to log in, work and log out and live in general obscurity. Getting the attention of a CEO, meeting a stranger in real life, and forced to play in a secret game of corporations were not penciled into his calendar. While that was bad, he started to question whether Odditek was still in control, or had their complacency created the noose tightening around their neck.

Bran was not yet aware of the choice before him. He could no longer stand back and watch, and he had to pick a side and fight before he lost the ability to choose. Would he recognize the inevitable in time? Was it possible to make a ‘correct’ choice, or had the lines blurred so much that hero and villain were indistinguishable?

You can find all my books here:  James G Patton's Amazon Author Page

Hey everyone, just reaching out to let everyone know I haven't dropped off.  Give you a few updates. First, Seventh Talon was pulled while I work on getting some of the edits done, and working out the stories for the next books. Not abandoning it, just need to fix some things. Second, I'm working on Lantern Online as we speak. Trying to get my edits done and figure out what I want to do with future books in that line. Right now Lantern Online is being developed as a stand alone novel, but I have an idea of running multiple story lines in here based on different types of characters. Then at some point doing a team up trilogy, and at that point you might see Bran from Office Wars making an appearance. Office Wars - I'm working the omnibus for this, it'll be a little different than the original story, as I'll change most of the logues into memory fragments and rearrange a few things. All of this in preparation for getting an audio in place for it. Thanks for
Read more

Office Wars 3 - Lab C Goats Optional Ok, well Office Wars 3 is close now. I have a little editing left, and then running it out to some beta readers and if nothing crazy comes back then I will hit publish. I'll make another post when I get my cover made. Playing with the title some, officially its Lab Coats Optional but the cover might have the C crossed out an a G penciled in. This is kind of a sad day for me, because I am wrapping up this series (with the potential to revive it later for another season). I like the people so I've hinted at seeing them again in another game world possibly. Seventh Talon This is being worked on, but it won't be a fast turn around. I have no eta, but it is being worked on. Lantern Online Thought I left this one out to dry didn't you? I am editing this one too, the book I wrote a long time ago, before Office Wars even, but its just been sitting there, because I wasn't sure what I was going to do with it. So... I made a dec
Read more

How is everyone doing? My monthly updates are going to be short this month.  I released Seventh Talon: Dragonrider's Fury last month, so if you haven't read it, please go check it out. Office Wars 3 Update Here is my big update:  I am currently working on it.  However, I think this may end up being the last book this season.  It'll be quite a bit longer than the other books.  I will probably release two books, OW3 and a combined copy of all three books, which I will clean up the first two and eliminate some of the rougher parts. I've been thinking about it, and I think the reveals you are going to get in book 3 are going to wrap up most of the plot lines and I am torn about continuing past some of that.  I have however put into motion the idea of revisiting it with a second season for year N151 (tentatively called Office Wars Mercenaries, which you will understand later). Anyway, expect a much bigger book 3 and an ending.  I might also release Lante
Read more